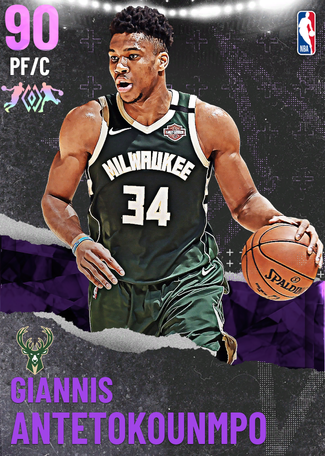 This Current Giannis card is super cheesy as usual. He does everything well.

Bought For: I think he goes for around 40-50k? I'm not very sure. All I can say is, be patient when buying cards.

Recommended Strategy: Honestly I'd try playing him at center; if your opponent doesn't have Bill Laimbeer or some other center with clamps(there aren't many) just 5-OUT and blow by them for easy dunks every time. If they do then just slide him to PF. If putting him at C just doesn't work you can always slide him to PF and he'll still be very effective. Another thing to mention here is to pair him with his duo, Khris Middleton(current). They both become so much better. Giannis' close shot gets boosted from 80 to 87, driving layup from 84 to 90, driving dunk from 82 to 90(big upgrades for the finishing), lateral quickness from 75 to 83, and FT from 58 all the way to 80. These are all super SUPER important upgrades. Middleton gets his 3 from 81 to 89, mid from 87 to 91(makes him much better all-around shooter), and big boosts to his defense and speed. Honestly with the duo Middleton becomes an elite budget card too. I'd definitely recommend trying this insane duo out, they'll be unstoppable.

Use if: You want one of the most OP cards in the game.

Don't use if: You need a stretch big to hit 3s consistently.

Bottom Line: One of the best cards in the game, if you have the MT and need a C/PF Giannis will get the job done.

ok I finished the review please read through it again and tell me what u think, it was unfinished b4

true, he has like no weaknesses. I changed it to 5/5

Best at C NEVER RUN AT PF HE IS QUICK AT C AND YOU CAN JUST CHEESE.

yea in recommended strategy i said to try him at C. but there is a clamps center named bill laimbeer already.

why did u leave it as unfinished

k i'm done with the review plz read through again

says unfinished at the bottom, had to go to sleep lmao. idk how this review has 3 ups

some people somehow found this b4 including @Dylzy05 lol

yeh i was bored

well needed review! he has a duo with khris middleton who is absoluteley kash, which makes both of them better a ton.

edited. it's in the recommended strategy section

How much is this card because he looks nice.

not sure don't actually have the game, I think close to 60-70k