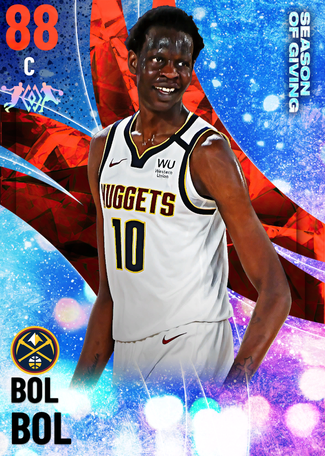 BBought for: 160k MT w/ diamond contract+shoe and evod out I got this card a week ago his price has dropped to like 120k for his evod version and 95k for unevod.

Offensively this card is fantastic. Doesn't have the best sigs or anything but he's a big man. This card feels really fast on the court. He's compared to Porzingis a lot, but I've used both and I think the main difference is how quick Bol Bol feels compared to Kristaps. In TTO he can really run out with the ball on the break, quickstop, then green a three from halfcourt. He's a really fun card to use offensively. Release is super nice I like it a lot. People forget he's 7 ft 2 as well, so even though he has 80 strength so won't really be able to bully in the post, can still make post hooks/fades when given the right positioning.

Defense. Only got gold clamps with 80 perimeter D and 83 lateral quickness is not ideal, especially if you use him at PF. If you use him at Center, he might get bullied in the post by guys like Shaq since he has 80 strength. He's isn't a bad defender by any means, there are just better defensive centers out there.

Recommended Strategy: In TTO, run out on the break after getting a rebound with him, quickstop, and green threes easily. Also, run pick-and-pops he'll hit those catch-and-shoot threes.

Use if: You like taller centers that are quick and can shoot from limitless.

Don't use if: You never run through your center on offense and only need defense. Or if you already have an expensive Center like Joel Embiid or Glitched Shaq.

Bottom Line: A fantastic card that while some say is outdated, I still think Bol is an elite center.