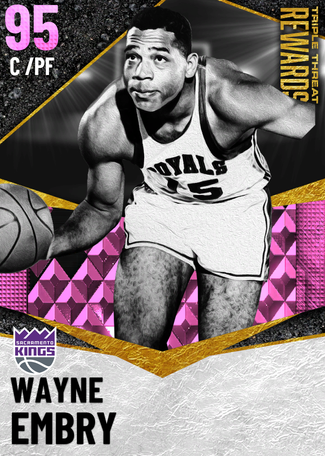 Bought for: Vault Reward (got him after like 80 wins)

Strengths: Dunking: For me, the best aspect of this card. Crazy animations with straight 97s across the board make this card an absolute monster, especially with the sheer absurdity of contact dunks on next-gen.

Speed boosting: This fits perfect for me as someone who loves himself a point center, so the ability to handle in the half-court and dominate in transition is really fantastic.

Defense: All around solid stats, good badges including Gold Clamps and 83 Lateral Quickness. If you on-ball, this card will be lockdown on all 5 positions.

Shooting: He has D'Angelo Russell's base, which looks weird but really good once you get used to it. Only a 76 three, but gold Catch and Shoot and hot zones in both corners make him cash from the corner.

Rebounding: Only a slight issue since he is only 6'8 and I run him at Center, so he doesn't exactly grab every rebound so you might get eaten alive if going against a large center, but if you run him at the 4, then this shouldn't really be an issue.

Dribbling: His dribble sigs are probably the worst aspect of this card, but since he is a center, it isn't that big of a deal. And the way I use his when dribbling, I just run him to the rim so I rarely try to iso with him, since he can just dust most centers by simply sprinting.

Conclusion: In conclusion, if you manage to get this card, use him. He is at worst a top 5 center in the game IMO and whether you play him at the 4 or 5, it doesn't really matter since he is great at both positions. For me, I play him at the 5 because I like to play small and fast and he is the best center for my playstyle. But if you like to have a big and imposing rim protector like a Mutombo, Gobert, or a Manute Bol if your on a budget, then I'd run him at the four.

Bruh how do you find these reviews

go to players then player reviews

dudeee this is a really nice review but sigs are not a weakness he's literally a big with giannis btb lol
I think 80 games for this card is worth it, but there's just no guarantee which sucks. no point onballing with someone with gold clamps anyway. thanks for writing an actual good review ngl when I clicked into it I thought it would be a troll one because of the title...

thanks man, means a lot. Yeah other than the btb the rest of his sig aren't that great. Also, I needed a good hook for a title, so glad my plan worked out lol.

lol I did a review on this card too; HAVE GRINDED 30 GAMES AND STILL HAVE NOT GOTTEN :( a lot of people got lucky with the vault this time around. but fr who is this dude

is this a TTO reward?

got him a few days ago and stuck a 3 pt shoe on him. hes a different breed hahaha