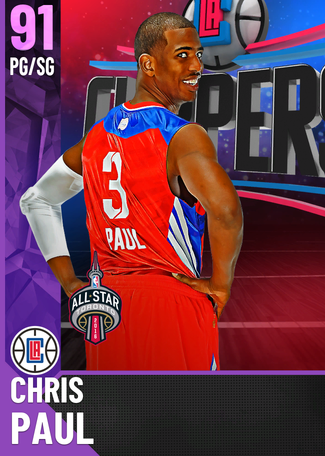 Best Budget PG In The Game.

I copped this Amy CP3 the day he came out, and man he was even better than I expected. The card can simply do it all! Why is he so cheap, I don't know. This is the best budget point guard in the game right now and it's not even close, best value as well. You will not find a card that does nearly what Chris Paul will do for you in this price range. I guarantee he is QUALITY. Definitely deserves this title.

Bought for: 10k MT but now he's dropped to around 7k which is absolutely ridiculous!

Recommended Strategy: I really don't need to put anything this card can do basically everything.

Other Comments: A card with all 3 of the most important badges in the game all on gold for 10k?!?!? Yeah you're dumb not to pick him up. Won't get outdated quickly because of it as well.

Use if: If you're on ANY kind of budget CP3 has to be one of your best options.

Don't use if: I don't see a reason why not some people don't like his jumper though I think it's nice.

Bottom Line: Stop wasting your time, go get this card for your squad!

Brooooo this is his 2k16 card! I used to torch people with this. This was the card that made me want to keep playing myteam. That's some good nostalgia.

yea that's the whole point of the retro theme lmao

too many full bars. thats literally all i can say

I don’t get temper on next gen

yea dunking is the biggest weakness for sure, whatever people say I still think he's a god. ruby lowry was too lol

what he's better than ja he can make your main squad if I get a new PG I'll even keep CP3 on the bench.

fair enough you don't need that many PGs anyway lmao. for me if I had a card like PD Curry I would probably rarely take him out anyway because every minute matters.

yea rafer's still a good card, jrue is good too how many challenges do you need to do to get him?

i need to win a dom game and i think 1 or 2 more of those 7 players so hopefully today i can do the dom then the challenge to get levert while using 7 nets players that is another challenge, them im gonna grind spotlights insane u need it for baron, i might give up on embry

i need to do 2 more games for it, still try for embry im not tho

oh ok I might tbh if tt online gets frustrating but idk lol embry is just not guaranteed you know so it's a tough decision, you're just getting levert for baron davis right

yeah idk I'm definitely not doing it lol DBG said he was actually good on next gen at least.

Yes I saw every card is usable on next gen tho

yea that's what DBG said Ja is like a god on next gen because clamps doesn't matter as much. and freaking like aleksej pokusevski is insane or something.

why is he the goat lmao he's terrible current gen

ok then I just have no idea who he is

he has only played 2 preseason games lol

why lol hopefully he doesn't get injured or anything

because there first game got canceled

nah it wasnt him, so 3 players tested positive or came in close contact with someone with it, so a few people had to miss the game then someone was injured and they have to have 8 people to play and they only had 7 i think

oh yeh that too one of the rockets players tested positive and then boogie came in close contact with him so he couldn't play so they didn't even have enough players along with harden not qualifying or something.

I don't understand why there is a smh lmao

Cuz it took forever and my goal was suppose to be on Christmas Eve.

ik for what reason though I was wondering.

i wonder think about it

??? I legit don't know is it the reason he mentioned

ok I didn't know you liked defending anon ;-; lol I will tho

wait what did I say that was so hurtful? just about him being you-know-what?

and tho u might be right, dont say im just defending him either ik what its like

didnt you see his lineup

nvm his card he deleted it

yeh I saw it when he already deleted lol

and wall im not sure if harden did

no I meant harden went to like a club without a face mask or whatever so he violated one of the NBA's new rules.

yes he only got fined 50,000 because its almost christmas and everything

okay u have said a million times

and u dont know how to shut up @Nba2kGod11 lol

i never said i didnt

yes I am excited for his reaction LOL go ahead :)

Lmao, I never said exactly that, plus, words don’t hurt me much....

wait I didn't say you said anything lmao if words don't hurt you much why do you get so mad at me sometimes it's all just words...

if its me it will lol

FAX you're like not a regular human to him XD

yeh, you should just randomly say you hate him one day in DMs or something and he'll be depressed

yeh I see this obviously at least I wasn't bragging about beating him literally 30+ games to 3 in 2k20. I'll get these Ws back he can say whatever he wants lol

he has no sportsmanship at all

I do, but I just am saying, I just overhype myself for some reason, idk why I do, well, I’ll stop the bragging then...

yeh learn to stop at some point lmao
not trying to hurt you but people who do that just do it because they know they're not good. real pros won't just keep calling themselves good.

But, I never said I was good, I’m decent.... and usually I am a negative minded person.

Decent is worse than good..

I know I meant before lol

ok I get it now, well if calling yourself good at 2k makes you feel better go ahead idrc

yet ur name is nba2kgod Imao

ok you can get some too.....
btw what I said above is true you make no sense sometimes

Beefing on my birthday and Christmas smh

did not beef on your birthday nor christmas

if you count this as beef idk what to say

Not beef but a fit.

exactly, besides pretty sure you started this one by repeatedly telling dylan you beat me

I only did it once lmao

@Anonymouses doesn't respond = I have a point :) that's just how it works

yeh he has 0 argument against liking dylan because he knows he does ;)

no not about that, and is there a problem with that

wait what lol I never said there was...

yes well be quiet then

bruh be quiet is basically shut up why are you annoyed :(

OK I WILL what got into your head though ;-;

Nor as a friend either, I knew.

bruh i do otherwise i wouldnt be talking to you

this was weeks ago

no its not something else i love his release

yes if you put a PD cover on him without changing stats/badges he would probably be like 50k at least.

if dazz commented that must mean it's actually nice

not really "budget" considering how much time you have to put into him, and without range I disagree.

idk i love jrues release more than anyones in the game rn... and cp is just pee

bruh nah CP3 is a god, idk about Jrue but you seem to have weird preferences like rudy gay

nothing, just that you need to apply two of the most expensive badges in the game...lol

his release is too good i can green from gold range

lol without range applied? that's not really possible to do it consistently... his release is pretty good though

Lmao yeah I did.

ok do you have a good team

I am officially. I got the series X on Christmas. I managed to get PD Iverson and Walter Davis.

yeh those locker codes were really nice PD AI and Walter are actually pretty good tbh lol. Iverson is a GOD Next Gen.

Yeppers. got a few ankles so far. walter was pretty cheap. i spent 35k on him. waiting for the price to jump up. also selling desmond mason for 26k atm

what who'd you get from the christmas PD locker code then, I might try Walter just cuz he's so cheap lol. did you pull desmond because I don't think anyone would buy him.

I pulled J-Rich and sold him for like 60K. I'm waiting for the price to drop a bit. RN I'm trying to upgrade my myplayer.

Yeah my bro spent about 53k on him.

Not sure. I actually use the current gen 2k on my series x to get vc lmao

Yeah, it has myplayer nation, next gen doesn't.

can u take a joke

didn't know it was one I don't think he's necessarily joking...

I got the game yesterday and need help with my lineup

bruh I'm willing to help people with lineups but seeing that you did this on my review? Nah.

smh he doesn't for me really, you're one of those "haters" I mentioned lmao

he was honestly good for me

at the time it wasn't.

At the time, Jrue was better.

maybe I don't think he had range and stuff tho

I just was chicken wit jrue

Jrue can do more things imo