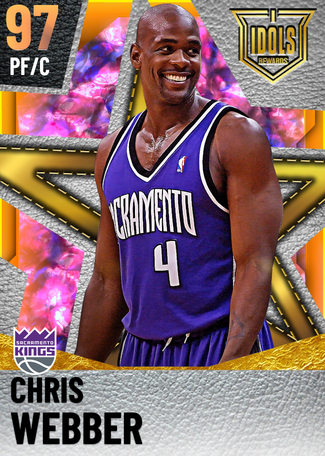 This card is too crazy. I haven't had the pleasure of using Blake Griffin but this card is definitely a rival for best center in the game. Embry has no chance of comparing as well. I'm getting next gen so if requested, I wouldn't mind putting out a next gen review.

I believe this card has great longevity and can effectively play pf and center. But for now Center is the better move.

-Defense: Elite perimeter defender for a center. The Blake Griffins and Wayne Embrys will have a rough time scoring with Chris's hof intimidator and gold clamps. Interior defense is pretty solid with the hof intimidator, but Webber doesn't come with rim protector or post move lockdown . If you're thinking of getting this card (or going against it) keep this in mind. Lateral quickness is great for this stage of the game but I would get a shoe for him as better cards come out. I would rate his defense a 8/10 off rip, but add his badges he can be a 9-10/10 defender.

Playmaking: Good dribble moves, fast w or w/o ball, hof dimer, he's like a better Magic Johnson that plays center, but unlike Magic is actually useable at center (looking at you 2k20 amethyst Magic).

Rebounding: I don't know how but he can snatch over three people, hof worm, box, and rebound chaser makes this card elite on the glass. If you're playing against this card on unlimited make sure to box this man out because he'll get 11 boards on your head. PD Shaq is probably the only card that can fend off this card effectively, but Chris seems to react and move faster than Shaq on rebounds (from personal observations)

Post Moves: I don't like to play in the post, but Post spin technician and his fading is pretty elite. I can't say too much in this area because I'm more of a perimeter player.

Point Center ability : Run a iso or 5-out with Webber as the ball-handler and you'll most likely get a bucket. Hof Dimer makes it too easy to get an assist while dishing it out from a drive.

-Locking in players: Magic and Manu are garbage.... KD and Hill are buckets though

Use if: You have the budget

Don't use if: You're too broke

Bottom Line: Jack of all trades center that will make any god squad for a long time. Honestly one of my favorite cards of all-time. What was 2k thinking when releasing this card?

hill = good but not great

magic = great if you know how to use him

Agreed imo Magic isn't good because of my play style but if he works, then he works.

how does this have 0 ups

good review it isnt worth it at all