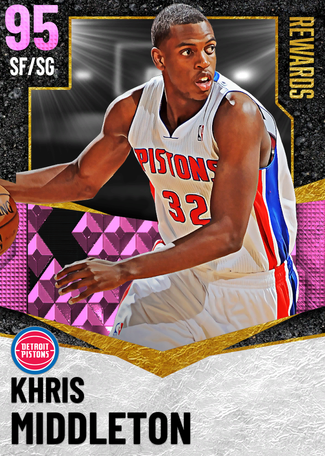 Today for the third IRL player review we are going to talk about Khris Middleton, at the time I'm writing this he's averaging 27 points 7 rebounds, and 6 assists and is shooting 50% from the field and 40% from three

Strengths: Khris is very underrated, he is one of the best shooters in the NBA and can create his shot with the best of them. He's a very good defender and can guard 1-4 and maybe even 5. Currently, he's averaging the most points on the bucks and is shooting the best. Khris could have always been a superstar and I saw the potential.

Weaknesses: I see very few weaknesses in his game, but one thing I do see is he isn't a very good passer on post defender. He is usually trying to just play catch and shoot instead of creating his own shot, he loses confidence a little bit. He's also very unathletic.

Recommended Strategy: DONT LET HIM GET HIS SHOT OFF OR ITS GOING IN.

Examples: In the Celtics series they just let Khris and Giannis go 1v1 and they lost. Then in the raptors series, they doubled the screens off balls ext and they won

Use if: You want an SF or SG who can create his own shot very well, grab rebounds get a few assists and s a good defender and catch and shoot player.

Don't use if: You want a playmaking SF or SG who is very athletic.

Bottom Line: Hes such a good player with few flaws in his game so I feel like he deserves more hype.