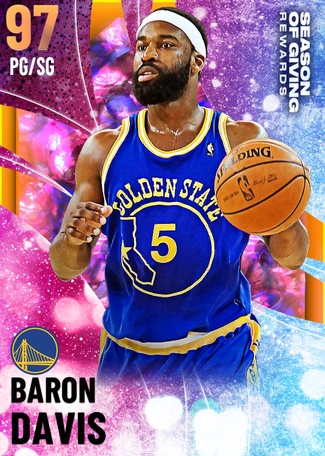 Cost: ok this is tricky because in the past you really had to get lucky to get these cards to lock in now the pd rj just came out with a locker code with it same with the Ai 3 times and they where in the limited this past Saturday so unless u didnt play at all it really wasnt hard to get those cards the emerald cards where locker codes the rubys where either challenges or to get the melo you had to lock in one day or just play limited because it was there to and the amy cards was jrue which was a challenge and morris which i think was the hardest because that took alot of luck when it first came out but if you played limited for a solid day you could get him and the dia cards vlade was the spotlight which wasnt hard it was just time consuming and richard ham which was a easy challenge and ja (locker code) and the Pd ai and rj at the end of the day became locker codes. soo (ik that was long just hold on because the review is ganna get longer) this card if you grinded for a solid 3 days and got the cards out of the locker codes you where fine i dont believe it was that hard to get this card and i did it last moment so now lets get to the review

Shooting: this is a no brainer hes a fantastic shooter with the 92 3pt and the 15 shooting badges its fantastic the important shooting badges on this card are gold range, hof tireless, hof volume, gold hot zone, and gold green machine. this card can shoot but theres 1 reason he misses alotof his shots and thats the lack of gold flex (the first badge i put on this card) and he has gold steady which is annoying for your wide open looks but ill get into why its not a huge issue.

Dribbling: Do you like park do you have the most unique and unheard of build the playmaking-shotcreator do you love his sigs well have i got the player for you you see i do have one of the unique and totally not copied off of youtube builds and i shit you not there they have the same sigs and it works you can curry slide behind screens which is a big advantage over alot of other pgs who cant curry slide !Cough!(stockton) anyway he also has hof qfs which omg 2k just keeps buttering my nips with this card hes so fast and hell never get ripped with that hof unpluckable i mean you can dribble forever and since he has hof tireless shooter you can still shoot even when tired its ridiculous he has alot of other badges here but i just wanted to say the impotant ones.

Dunking: 95 driving dunk hof contact.....alright 2k so hes 6'3 and you thought it was a good idea ok to let him dunk on kareem....ok im fine with that i mean he has other badges which are great hof showtime(doesnt have showtime dunks :( but in tto its fine) hof relentless, hof fastbreak, fancy, acrobat, and giant slayer, i mean his animations (except in too) are bland but he can still dunk on people and its no stockton but it gets the job done.

Defense: 93 lat, 90 perimeter, hof pickpocket, hof interceptor, 80 on ball steal, 82 pass interception. i mean you can hold onto the ball just fine with hof unpluck huh but no one else is he just gets steals everywhere and he stops everyone he has gold clamps, and heart crusher which is really really solid so if you think this card is ganna be a liability on D hes not now he does have a 25 interior which is bad but theres an easy fix for this never let him in the paint thats it

2: steady shooter and the lack of showtime dunks this hinders this card from its full potential without steady hell never miss with showtime dunks hes GO stockton but without these i mean with the shooting it hurts more because i do find myself missing some open shots but if your even a little bit contested i mean youll be fine

Strategy: run at Pg and make him the main ball handler and curry slide through screens

Get if: you have the time to grind

Dont get if: you dont have the time to grind

end thoughts: hes a fantastic card now i see people trying to put him vs pd curry which no thats not fair to either of them there two totally different cards but if we are putting them against each other i think Baron is better bc not only is he not too hard to grind for but you get some good cards along the way ai, rj, and hamlton are all fantastic cards and id put this card as a better deron but thats just me

bruhh yea beck is a god I might try some tt offline. he can shoot better though.

yes but doesnt dunk as good and he needs rim protector

yea embry's dunking is like blake, isn't he a PF/SF?

why does he need rim protector then

true especially if u want to run him at the 3 in tto. but I don't like adding badges to unauctionable cards

i do the opposite i hate adding badges to actionable cards bc i know one day ill get rid of the :/

them? bruh they will sell for more though... for reward cards once the card gets outdated you've basically wasted a badge -_-

but i understand what ur getting at i mean you do lose money but i only badge up those cards if ik there ganna be useful for awhile like wayne, baron, and beck there ganna be usable for awhile and if not in starter then in backups bc at the end of the day they where free so if i spend 20k on the badges of that card i basically spent 20k on a godlike pink dia when to get a godlike pink dia (pg) your ganna spend upward to 200k so what im trying to say is i spend money on cards that deserve it i mean you dont see me tring to badge up finley or nothing just cards that are ganna last for awhile

I don't have him and didn't try to grind for him

@Nba2kGod11 @TheFakeDazz @Dylzy05 @DameDaGoat what do u guys think about this card? do you have him? and if you do was he hard to get? and if you dont what card set you back?

didn't grind baron because I don't have time :(

Curry is still better than Baron. Anon paid someone to grind Baron for him. Baron feels like a better badged up Deron Williams because all you really use him for is curry slide and shoot, His dunks are very casual so he's not really a slasher.

and he has better defense

im getting both him and wade today lol