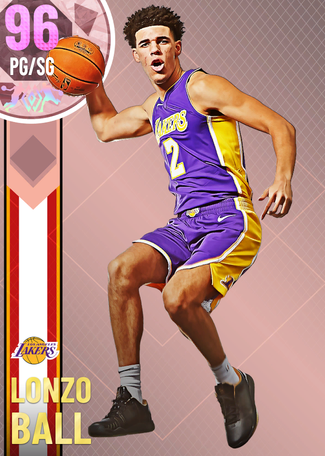 Hello everyone today I will be doing a review on pink diamond Lonzo Ball. This is my first review since 2k20 myteam where I did quite a few, I’m not sure how active this site still is but figured I would write some reviews anyway this being the first. I mostly due Budget cards being I'm NMS but I’ll also do some higher up ones just to test them out.

Shooting- 93 3 ball good release and HOF flexible release make this card reliable from 3. He can constantly hit shots and I really like his release really nice off the snatch back too. Wouldn’t recommend catch and shoot but that’s not why you get Lonzo anyway so shouldn’t be an issue

Defense / Size- This being one of the biggest benefits of the card Ball being 6”6 really helps a lot he can easily defend 1s and 2s and can hang with some 3s giving him a lot of versatility on the defensive end. It also helps him bully smaller point guards on offense. His post game isn’t good unfortunately but Lonzo can still bully guys on the inside. His defense on the perimeter is just amazing he doesn’t get as many steals as I’d think but he clamps up almost everyone he can really change the game on defense even without steals

Playmaking- This is probably why you get this card the guys got the badges and can set up anyone with dimes. HOF needle threader with HOF dimer really allows for him to make any kind of pass wether it’s wide open or tight window and 98 pass accuracy is insane. He can set up anyone anywhere.

Driving- He’s really good at getting to the rim and does it pretty constantly for me, HOF QFS with his good dunk layup and draw foul ratings allow him to attack finish and get to the line pretty well for me. His size also allows for him to bully smaller guards on the way to the rim pretty easily

Handles- I’m not much of a dribbler in this game I know a few basic moves but Lonzo is reliable with his moves he’s got some HOF badges and he very rarely gets stripped which is nice, can freeze a defender and make a move towards the basket he’s got great speed with ball too which helps a lot of crossovers

Transition offense- One of the more underrated things about this card dude is deadly in transition because of his passing and snatch back 3 as mentioned earlier run the floor with him and you’re probably getting a bucket his speed allows him to zoom down the floor and leave the defense scrambling.

Disclaimer- I will be selling Lonzo for the sole reason of having Ben Simmons and being a sixers fan if it wasn’t for that I’d keep him easily.

Don’t get if- you insist on throwing up 3s with your PG. you can do that with Lonzo but it’s not his game

this site is dead, good review tho

You should do one anyway I would love to see you what other people think of the card too. Also nice to see others still
Doing reviews on this site

I’m gonna try and bust out some for some budget cards honestly, I got online classes so a lot of free time lol and I enjoy doing them

great review, cheers man. Picked him up based on this and I got exactly what you sold me. This is 100% accurate. Really appreciate the few people left like u on this website.

Thanks man glad I could help out!! I’m gonna try and bust out more as cards keep coming out

Yeah man, keep it up.