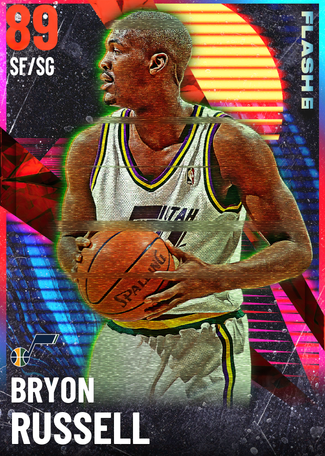 Hey guys today I will be doing a quick review on Bryon Russell. I say quick because the title is pretty self explanatory to what you’re getting

Defense- Russell is clamps plain and simple alot of guys have good defensive stats but don’t always clamps up Russell does. Being 6”8 obviously helps (more on this later) and once he’s evod he gets HOF clamps his frame and build allow him to hang with anyone. He’s yet to be dropped off and he’s played some good players including PD Jimmy and Diamond Durant.

Versatility- his size allows him to play the 2 and 3 and he can even guard some 4s. Don’t be scared to switch on screens Russell can probaly handle it if it’s a PF his size at the 2 is a big boost especially if you’re playing a zone defense.

Shooting- I say average solely because of release it’s a little slow like his rating his great at 93 and gets HOF catch and shoot at evo if he’s open and you have his release down he’s butter just not the guy you want spraying in someone’s face.

Bottom line- for my fellow budget ballers I recommend getting this guy he does 2 things well but those 2 things can make a big difference in a close game.

when evod hes a god i would have him higher then 3 stars because he is a top 5 budget card in the game , good review