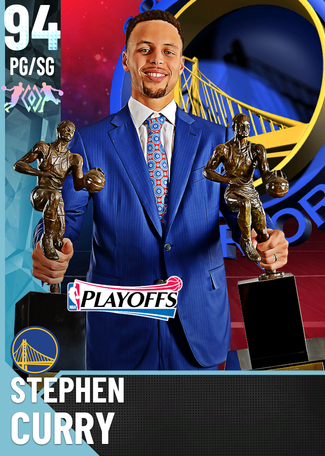 I'm (FINALLY) back with another review today, because this Diamond Curry card was WAY better than I expected. He was literally a cheat code as I grinded Triple Threat Offline for Terry Dischinger, and it made the games go by much faster. I expected to sell him back after I was done which I did, but I'm even considering buying him back next week. Shows how well Curry performed when I used him! Let's get into the review:

Now pair this with the CURRY SLIDE, arguably the most overpowered dribble move in the game, and you're not stopping him from getting his buckets from deep. The fact that he also has Gold Handles 4 Days means you can even spam it a few times for more space, a deadly combination. If you're playing against the CPU, dribbling up the floor and Curry sliding into a 3 works every time.

Another part to mention about his 3-hunting abilities is the fact that he has the Pro 2 tween, which might be my favorite(I'm a fan of Pro 8 too) in the game. It gives a quick change of direction, so you can hit it once and run to the side for a peekaboo three. Curry's release is so fast that it won't get contested either. I find this method very effective for this card. Chef Curry can straight up cook people!

Curry comes with nearly every playmaking badge in the game including Gold Dimer and Floor General so if he gets too much attention on the perimeter or on the drive he will make your opponent pay.

Recommended Strategy: 3-hunt, 3-hunt, 3-hunt. That's what this card is best at. Look for opportunities with the Curry slide it will make your opponent frustrated because they can't guard it at times.

Other Comments: As most of you know he is basically the PD, who is still regarded as one of the elite PGs in the game. I will say Lonzo is probably better(and only 10k MT more) at least on current gen.

Use if: You look to shoot 3s with your point guard on every possession or want arguably the best offline card in the game.

Don't use if: You need someone to consistently get contact dunks and rim-run as a priority.

Bottom Line: Incredible card for a buyout, for certain playstyles you really can't get much better.

It's sad how you have to say no Stockton on dunks..

ikr it's crazy why both stocktons are dunking machines, his animations are actually insane too

I think he has Rudy's dunk pack which is amazing

A lot of the new cards now have the curry slide, it’s straight up ridiculous like since when was Klay Thompson a dribble god that can three hunt

yeh by endgame every card gonna have the curry slide, for some reason klay's sigs have always been nice

Haven't done one of these in a WHILE but this might be one of my best so far, this card was legit insane in tt offline though lol @Dylzy05 @TheFakeDazz @ballerboof2 @burrito07 @NBAMJ @RapsAndCalvinMurphySuperFan @DameDaGoat @TotallyRadical

read in 30 seconds lolol actually though

thanks! and yeah they feel the exact same except a little better defense for PD

yeh his release is so much better than fultz's idk why, he's so good offensively

why the fuck is he 4 stars.

You gave diamond Stockton 5 stars but diamond Curry 4 stars. If this Curry had the PD gem color, I guarantee you that you'd rate it 5 stars.

dude if we were to do it like that every card from here on out would be 5 stars, it's relative to the time they are released.

thanks, and yeah offensive god

he makes tt grinding so much easier

no chance he's that cheap lol

He was last time I checked

really wow didn't dbg sell his for like 80k just yesterday?? and he's on ps4

Seperate sliders you have to use to see the 30K, some go as cheap as like 15K