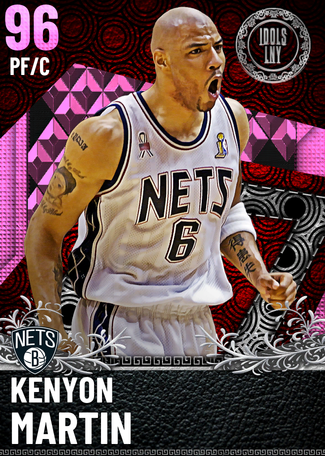 This card is rather interesting right like wayne hes a 6'9 that can run Center which is around my playstyle i like to have a fast and versatile center and let me tell you this card works with or without the evo.

Cost: depends the markets kind down now so i got mine for 100k on the pink dia while the Go is around 160K

Finishing: this card is a demon with the finishing 98 on both dunking stats with a great post fade and hook of 98 aswell. he gets great animations such a massive tomahawks which give a good flashy but safe feel to it so that you can get the showtime without getting blocked. he has 14 intotal finishing badges which you can go look at but he does get showtime and contact if you where wondering that.

Shooting: i love this mans jumper with a passion i fell in love with it asoon a i first shot with it he starts at an 84 but the evo gets him to 88 3pt and his evo also gives him gold range which is perfect he gets 8 shooting badges in total and its honestly all you need.

Playmaking: this card has pro3 so this card feels like a 6'9 allen iverson when hes dribbleing which is magnificent he also has hof qfs which is perfect bc he just zooms of the dribble to the paint combined with the 89 speed he in total has 8 playmaking badges which is good for a center. ( he also has gold unpluckable super good on a center)

Defense: now this is where i can write an essay about this card in he has some of the bes Defense ive seen on a card in awhile like he really feels like a galaxy opal when hes evoed up. he gets hof clamps, heart crusher, interceptor, intimidator, pogo like the whole ordeal of godliness. his tendency's would make even Kirilenko cry 80 on ball steal, 95 contest, 95 pass interception, 95 block shot like hes completely juiced for defense.

his evo requirements: its time consuming and can take awhile fortunately i did the evo while i was grinding shawn marion so it was easy but thats the only weakness.

ok so this is the end and im not going to do that strategy bull crap ill just tell u what i think all in one big essay. the cards good most certainly worth it now i use him at my center bc he can handle it i use wayne for the longest of time this is literally better wayne so im used to it bc thats my playstyle i run the ball through everyone but i also want all my players except my pg to be lockdowns and he works he can guard alot of people and i went up against hakeem. so what im saying is get the pink dia its cheaper idc if u have 800k mt just go with the cheaper option youll save money acually youll gain money bc when u evo him his price goes up and i recomend doing the evo in the 50 game spotlight tt offlines its faster and super easy. and i already said this card is like a wayne embery just better on the shooting and honestly everywhere. so get him hes an easy way to get your first opal for 100k just do it hell last for awhile run him a pf if you like or run him at center hell do good either way but thats all and i hope yall have a wonderful day and pls may we get a good tt ofline card pls ik the vault cards are god but i want a good card for the 150 grind pls i didnt review doug west bc hes shit just pls 2k pls.

Nice review man been thinking about picking him up, got a lot MT stashed away

I'd never complete his evo in time before he starts dropping so I would just buy the opal if I were to.

maybe he will. for some reason I have a feeling even though it says PF/C he'll be good at the "2" in triple threat if u know what i'm talking about. u could mention sigs as a weakness they're pro but not great.

did you mean pro 3 escape cuz he doesn't have pro 3 btb, pro 4 btb and tween are bad

no they're actually ass I think they're AK's sigs

Compare him to Sikma but worse.

sikma? thats not a great comparison either lol they are rly different

Kenyon and sikma are great shooters, kenyon is a better defender, both can be used in the pnp. But, Embry is a completely different player to kenyon compared to Sikma.

that was a bad comparison i would say better boucher or a way better blake, hes great when evod, ggood review

id compare him to boucher