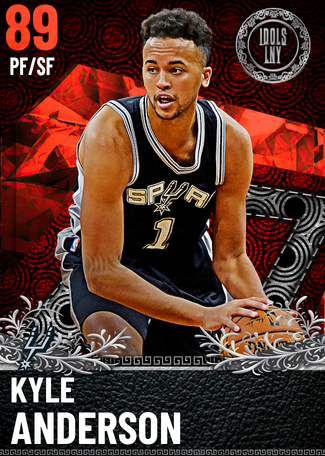 Hey guys today I will be doing a quick review on Kyle Anderson. I’m trying to get back into doing reviews on budget cards more often and Kyle Anderson’s a great one!

I bought him at a ruby and evod him over time playing domination and the triple threat games under the spotlight series I just bait blocks with him in triple threat and got him evod relatively quickly.

Defense/player build- Anderson IMO ofc is one of the best defenders in the game pure and simple and a lot of it is due to his build. Once evod he gets HOF clamps but even as a ruby he just plays insane lights out defense. He is a more than capable 1 v 1 defender which I love. Does he get beat occasionally? Yes it’s TTO everyone is gonna get beat sometimes but generally he can always stay in front of his guy and his insane wingspan allows him to get plenty of steals and blocks and he is really good at intercepting passes. Even when he gets beat his wingspan allows him to get blocks or at the very least disrupt the shot he’s also 6”9 which helps. I trust him guarding 1-4 for the most part

Versatility- can play the 3 and 4 and as I said earlier can guard 1-4. Versatility leads to longevity which leads to more value out of the cars don’t underrate this part of his game

Slashing- he gets to the rim pretty good, you guys can see the ratings but it’s his crazy wingspan that allows him to slam on people. He’s rarely gotten blocked for me.

Athleticism- it’s really not that bad for a guy who’s nick name is slow mo, he moves up and down the court pretty damn good and is great in transition. Sometimes you do notice the speed but honestly not too often

Anderson really has no real weaknesses in my eyes

Player comp- he reminds me of Jonathan Isaac quite a bit in terms of wingspan and what he does on the floor.

Get if- you want a guy who can do everything pretty good on offense and play clamps defense and guard almost anyone and if you’re a budget player like myself or not he fits on any team.

Also forgot to add, he’s a really really good rebounder guy pulls down a lot of boards due to his wingspan