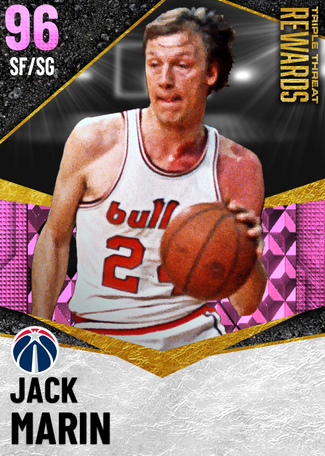 OK, I am back for my 1st review. Today it is time to talk about Pink Diamond Jack Marin, a.k.a. "The Lawyer". I know this card came out a while ago, but there are no reviews for the card so I thought that I would make one. I was able to finally get this card on the LAST DAY of season 4. Let me tell you this card is ELITE. He is a 6'7" SF/SG. He has a 6'10" wingspan, and weighs in at 200 pounds.

Shooting: Jack Marin has a 93 three ball, and with a coach/shoe/floor general boost it is a 99. He also has a 95 mid range. He has good shooting badges including HoF Difficult Shots, Flexible Release, Hot Start, Slippery Off-Ball, Tireless Shooter, and Volume Shooter. He has gold Catch and Shoot, Green Machine, Hot Zone Hunter (With Hot Zones from everywhere around the arc), and Range Extender. Not only does he have great stats and badges, but his release is money. He has Larry Bird lower base, with base 56 upper(same upper as Pete Maravich), and it is on quick. His release is really quick, but also easy to green. He also has the Pro 2 escape so he can Curry slide around screens and stuff if that fits your playstyle. Defense: His Perimeter Defense Rating is a 98, with an 88 steal, and 93 lateral quickness. His interior defense is also good for a wing player at a 78 with a 65 block. His defensive badges include: HoF Heart Crusher, Intimidator, and Off Ball Pest. He has gold Chase Down Artist, Interceptor, Lightning Reflexes, Pick Dodger, Pick Pocket, Pogo Stick, Tireless Defender, Trapper, Rebound Chaser, and Clamps, which trust me, it feels like HoF clamps. I usually put him on my opponents primary ball handler. His defensive tendencies are good too. He has an 85 pass interception, 85 on ball steal, only a 15 contest shot, which is bad, but he does have a 90 block shot, and only a 5 foul and 20 hard foul tendencies. Slashing/Rim Running/Playmaking: Marin is a great Rim Runner in a 5 out situation. He has HoF Quick First Step, Downhill, Unpluckable, and Handles for Days. With gold Ankle Breaker, Bail Out, Break Starter, Dimer, Floor General, Lob City Passer, Needle Threader, Pass Fake Maestro, Space Creator, and Tight Handles. His attributes include a 90 speed, speed w/ ball, and acceleration. He has an 86 ball handle and 80 passing accuracy. His dribble sigs are okay, with the Pro 1 behind the back (same as T-Mac) which I think is underrated and he has the Pro 7 tween (same as MJ). Not only is he good at getting to the rim, but he is great at finishing there too. He has a 90 driving layup and 90 driving dunk ratings, to go along with a 95 driving dunk tendency and flashy dunk tendency. Not only that but he has great dunk packages. His finishing badges are not great, but not bad either. He has HoF Acrobat, Relentless Finisher, Contact Finisher, Fancy Footwork, and Slithery Finisher, as well as gold Consistent Finisher, Giant Slayer, and Pro Touch. I will say that you need to apply Showtime to the card. Rebounding: For a SF/SG he is a great rebounder. His ratings are not that high at a 72 offensive and 78 defensive rebounding, but he does have gold Rebound Chaser. Something about this card seems to get every rebound. Weaknesses:

Badges to apply: The badges I would recommend applying to this Jack Marin card include Showtime, Deadeye, Corner Specialist, Clutch Shooter, and maybe Post Move Lockdown, or Rim Protector.

Use if: You have the card.

Don't use if: You don't have the card, or if you have basically the best team possible.

Bottom Line: The Lawyer is a very good card in NBA 2k21. He fits basically any playstyle. I absolutely love this card.

I hope you guys enjoy this review of Pink Diamond Jack Marin. That is all I have for you today.

great review, i wish i got him

thank you, I greatly appreciate it

hold up nvm u copied it lol

There's reviews on this guy...

mass tag me again motherfucker i dare you

are there so many

bet now u getting blocked

Imao after getting 1 extra noti your gonna block someone

nah its not bout the noti,its just this is the 17th time in under a week.....like fr something has to end

like its annoying,every time they always tag me for some bullshit and i ask them not to tag me because my ass is so far behind on fucking classwork!

well why go on this site in the first place then

so i can talk about 2K,duh no brainer

like why else would i be here?i mean the reason explain itself

you said you were way behind on classwork

since you think thats funny how about i block you as well dumbass?