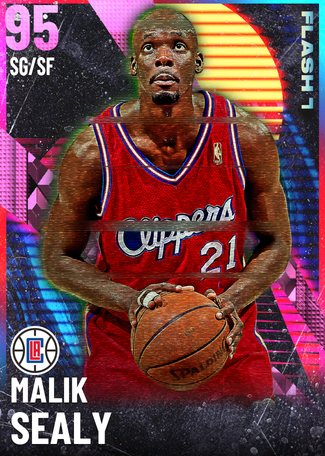 I’m generally an MT hoarder being NMS but I wanted to get sealy and try him out, he is now undoubtedly making the squad and will be here for a while

Shooting- Release is ray allens on quick and it is butter he’s great off the catch and shoot and as you can tell has good badges. Worth noting he’s better off the catch than the dribble great spot up shooter and great in TTO rarely misses. Also noting, once you time the release it’s over it’s super smooth once you get it down.

Defense- guy is legitimately one of the best defensive cards in the game IMO. Don’t be fooled by the steal rating of 85 his tendencies are insane. 95 on ball steal and 95 interception tendency. He gets steals occasionally but this card is just shutdown. He can easily guard 1-3 and some 4s his body type allows for you to keep in front of your man and not get beat. He’s rarely beat and just seems to be on everything the only times I’ve rarely been beat with him are buy smaller guards. But generally he’s never beat and is amazing at intercepting passes he can really disrupt another players flow with his 7”3 wingspan which is just ridiculous in game

Dunking- you see the ratings you see the badges guy just slams on people for me. Being 6”8 he just soars over everyone and gets the bucket he draws an okay amount of fouls also

Price- I think this card is more than worth it. He’s going for around 30k and he needs to be on your squad especially my fellow NMS players so we can compete with the other OP cards Sealy can more than hold his own. I generally don’t spend MT a lot but had to for Sealy.

Player comp- can’t take credit for this one because 2 guys already said it in the comments he’s like a Kawhi Leonard he gives you a lot of what opal Kawhi does. Shooting, defense, slashing and player build

Don’t get if- idk, even if you have a god squad I think this dude can be on those teams.

Bottom line- one of the best cards I’ve used in a while I usually have a favorite card or two every year and I think Sealy is gonna be that guy by the end of the year.

bro? i'm on xbox and he's not 27k. did I overpay(I did 60k for one with gold flexible) or was that a massive snipe?

I got him for 27K yesterday but that was below what most people were paying for him and yes it supposed to be hello not hell haha and I’m glad you like the fit and experience part of it, I think it makes the review better and more in depth

this is a good review bro! definitely agree he might be the best card in the game for under 50k. glad you added "fit" and "experience", interesting

i feel the same way. budget ballers and NMS ppl UNITE! sealy is here to save us! good review tho

Just an update, I’m seeing I got a good price on the card I see him for 44kish and he is still a steal at that price

For me is a better Rudy Fernandez and a worse Kawhi Leonard.