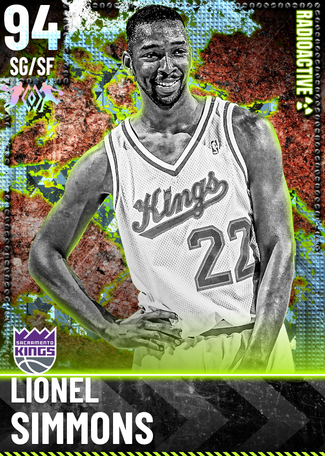 Hello, this is my first review in a while and I’m going to be doing it on Lionel Simmons, because why not.

-Slashing: This man is an insane slasher.With many good badges like HOF showtime, HOF contact finisher and many more. Not only that, but he can get to the rim very well with his insane speed at the sg position (94), hof qfs and good sigs he blows by everyone. You may think that’s the end, but no he has a 95 driving dunk and a 90 vertical with all showtime dunks.

Use if: You need a Shooting Guard that can do everything for cheap

Don't use if: You don’t need him or you are extremely broke.

Bottom Line: I totally recommend buying Lionel, he is a beast

W good card for cheap is he better than fernandez?

I think his release might be too quick. mpj base off rip is quick enough there was no need to put his release on very quick. great review though!

thanks, I think his release timing is fine

okay do you think he's better than Sealy/Wiggins?? current gen

WHEN YOU SOMEHOW FORGET ME BUT I FIND IT ANYWAY

good review, im not really a huge fan of him i prefer clyde, wiggins, sealy over him