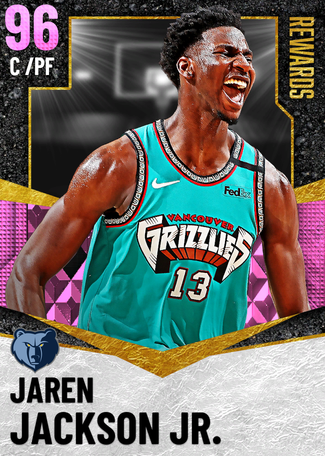 Jaren Jackson Jr. is as good as your gonna get for a free card. Insane three ball, 7’4 wingspan, blocks shots often, and rebounds like wilt and Kareem. He is definitely a top 5 center in the game and should make it in everybody’s team, unless your centers are Kareem and wilt. Must get card, and you even pick up a nice chunk of xp on the way! Definitely better than the Sabonis and kat cards. I mainly use this Jaren as a rebounding, shot blocking, pick and pop player. He’s got a very quick shot so be aware of that if you shoot with no meter. He has a cash release with a nice three ball and he moves off screens very well for a center.

Bought for: nothing, he’s a free agenda card

*Recommended Strategy: Pick and pop threes, or using him as a paint presence.

Use if: You want a top 5 center in the game who’s free and doesn’t have any weaknesses.

Don't use if: You have Kareem or wilt, matter of fact, just sell them, you’ll hardly notice a difference.

*Bottom Line: Best free card in the game outside of Danny Ferry, and is a great addition to any team! Go get him now! Only takes an hour to complete all of the challenges to unlock him even if you haven’t started the clues or new leads!

wow you made this pretty quick lol

wait it really takes only an hour? people said it took 2 hours. great review, idk if I'll get him though. definitely insane for a free card!

Nah, an hour at max