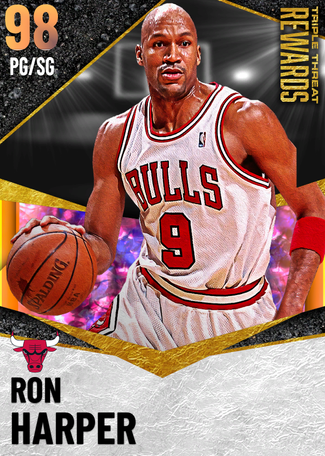 Yo, Strap here. I was doing tto challenges for xp and accidentally got him. I gave him a try seeing as my pg's are Haliburton and D-Lo and I have been looking for an upgrade. I was skeptical at first because I saw his release on 2kDB and was like "Yeah, he's dirt." Then I watched Ty play with him and decided I would give him a few games to prove himself. And this card is RIDICULOUS.

-Shooting: HEAR ME OUT...Manu on Very Quick is a B-Tier release. I'm saying it because it's not only usable, but it's actually nice. It's no worse than jump shot 4 which is Opal D-Mitch jumper. He comes with Hof Catch and Shoot, Hzh, as well as gold range, flexible, corner specialist and green machine. I gave mine bronze dead-eye (which statistically works better than Hof deadeye), and bronze volume (which statistically works better than hof volume.) The man can SHOOT. Add a shoe + Frank Vogel + Hof Floor general and Ron has a 98 3 pt!!!

-Playmaking: Everything you need except bailout. Curry slide and usable full-court sigs.

-Defense: Best defensive point guard in the game without question. On-Ball, off-ball, Lavar Ball, it does not matter. He is a BOX BOI. I've watched dudes' offense breakdown bc they weren't able to speed-boost/burst past Ron without getting '[Late] [78% Contested]' popping up. I put post-move lockdown on mine so he's not getting drop stepped or anything dumb like that. And he plays lanes like a TOTAL BEAST. https://2kdb.net/player/2k21/ron-harper/9144

Other Comments: (optional) "He is a shorter Opal Magic that's better at everything except post offense (which was patched so post hooking is basically dead and no longer matters.)

Use if: "You want a do-it-all lockdown GOD."

Don't use if: "You HATE Triple Threat Online and Kobe and Grant Hill are your pg's."

Bottom Line: "Bro he was a pleasant surprise and is a great player in general. I urge you to get Ron before he is removed from the TTO boards. HE IS AMAZING."

great review, i have been trying to get him since he came out, i have seen him twice and im 0-11 with him on the board (i did the glitch but lost my next 2 games on 1 of my runs) i was kinda mad because my pg rn is pd lonzo who is perfect for my playstyle and harper is just better lonzo