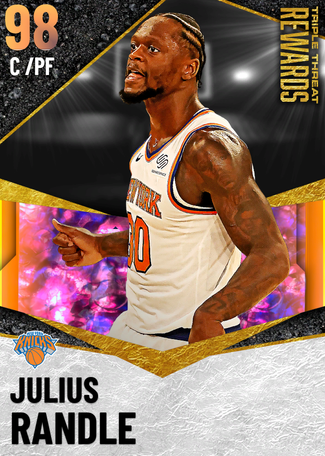 This is my 5th IRL Player review and it's gonna be on someone who some call a "1 season wonder" and some say "He's in the MVP conversation" Let's talk about Julius Randle.

Strengths: Offensively I think this man's game has improved tremendously, He is the main reason the Knicks are at the 4th seed. Julius has improved on playmaking amazingly and has learned how to run an offense, this man's pullup and three have also improved (he is shooting 40% from three!) his efficiency and PPG have also gone up and in general, his offensive game has been great. Defensively he has also improved (The Knicks have a top 3 defense in the NBA!).

Weaknesses: Julius can sometimes force up dumb shots (but they have gone in this season,) but Julius needs to start taking better shots (He has improved in that aspect a lot but he still forces). Julius also has improved on defense, BUT he still needs work on that end. He sometimes gets lazy on defense and expects the Center to pick up every time,(no matter if it's KAT or Enes Kanter he will just expect the Center can't shoot) Julius also forces up bad shots when he is double-teamed (Like Giannis) but he is not like Giannis where he can just force it up and it goes in because he's 17 foot 9.

Recommended Strategy: I would say try to double Julius as much as possible but everyone on the Knicks can usually shoot the 3 if left open, on defense you should attack the paint on Julius because he gets lazy (especially if you're center can shoot)

Final Comments I really like how Julius has improved and I think he is gonna win MIP, I love his new game, and if he tweaks some of the things I said I think he really can be an MVP someday.

Use if: You want a playmaking 4 who can spot up and run the offense well.

Don't use if: You want a defensive 4 who only should grab rebounds.

Bottom Line: "Great value for money, nice player to use while building up your team."

lol I just found out about these keep doing these