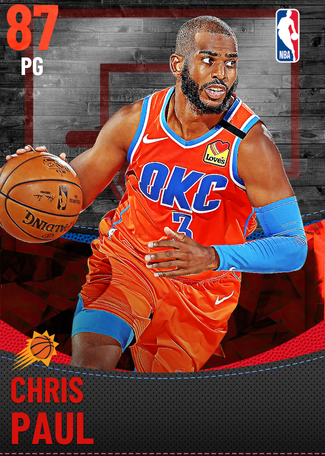 Strengths: Chris Paul still has amazing IQ and passing vision, which allows Devin to not have to hold the ball all game long. Mikal Bridges, Deandre Ayton, and others have all improved tremendously because of CP3. Chris Paul is still able to shoot the mid-range with the best in the game, he has only missed about 6 free throws this season!!! Chris Paul is having one of his best 3 point shooting seasons as well, shooting 40% from three! Chris still has defense and is still a vocal leader on defense. If I told you last season the Suns would be the best team in the NBA record-wise what would you say (leave it in the comments below)!

Weaknesses: Chris Paul has become slower and that happens with age (offense he is fine) I'm talking about defensively he has become slower on switches and just 1v1 situations in general. He is still a good defense, just not elite like he was before. Another thing that has taken a drop this year is his shot-taking tendencies. Chris has passed up wide open mid ranges for no apparent reason that he would have taken every year before. I don't know if it's cause he has better options around him than last season or what is happening but he just won't shoot some open shots.

Recommended Strategy: I would try to stop his pick and roll defense because he is elite in that situation and will outsmart any defender, I would try to keep him in a 1v1 situation so he doesn't have any passing outlets.

Use if: You want a PG with amazing IQ and passing skills, with good shooting ability, and is great in the pick and roll. Also can play good defense and is a floor general.

Don't use if: Every NBA team would want Chris Paul

Bottom Line: Chris is still an amazing PG at 36, sure he has declined in some ways, but he is still leading the Suns to the best record in the NBA and could win MVP!

W if you told me the Suns would be top team in the West, I'd think you're crazy. I initially thought they'd be 8 seed!

Not every team wants cp3. The nets already have a crowded backcourt so do the blazers and wizards

But mostly accurate. Also I wouldn’t of called you crazy, I would just be a little skeptical