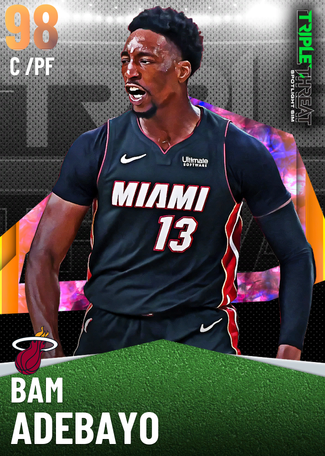 Let's talk about the man who at one point I thought was the 3rd or 4th best big in the NBA to then thinking his team did better without him in the finals, let's talk about Bam Adebayo

Strengths: Bam is a great playmaker and is the best passing center besides Jokic, his screens for shooters like Duncan Robinson Herro ext. He is a great defender and can gaurd 1-5 and he can gaurd the switch as good as any big. His speed is also amazing as be is quick enough to switch on defenders or attack the paint on slow defenders very easy. Bam can shoot the mid range well he just doesn't want to shoot them for some reason (I will explain more in the weaknesses)

Weaknesses Bam is playing poor defense on switches this series and is not using his speed to his advantage defensively or offensively. Bam should be cooking Brook Lopez and he I'd just not using his skills in the correct way. Bam is also not pulling wide open mid range shots. He is just not playing his normal play and is scared of the layoffs on the the other team

Use if: You want a defensive center who can switch well and hit the mid range with good on and off ball playmaking

Don't use if: You want a 3 point shooting center who can grab boards well

do Jordan Clarkson next