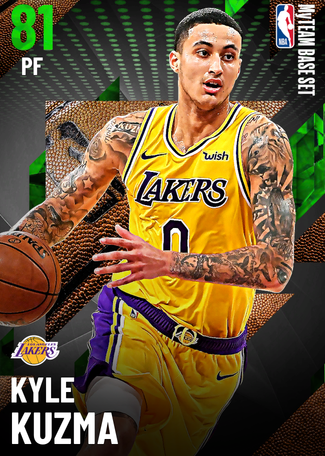 For the first IRL player review we're going to talk about Kyle Kuzma, a controversial NBA player with many mixed opinions, here's mine.

Strengths: Kuzma is an amazing three-point shooter, he only shoots 35% (we will get to that later) but he is a great shooter. Kuzma is also an amazing scorer, he can score from anywhere on the court and is just a good scorer to have. Kuzma has also started getting more rebounds this season, he is averaging 9 rebounds and is actually starting to spread out his game more than just scoring

Weaknesses: Kuzma can only score, that's it. He can't play any defense and he can't do anything else on the court besides iso and score. Kuzma is also really inconsistent, in one game he can drop 30 7-7 from three and like 12-13 from the field, in the next game he'll shoot 0-20 and 0-10 from three.

Recommended Strategy To Gaurd: I would honestly play him on how he is playing this game, if it's good Kuzma then put a decent defender on Kuzma in the iso and you should be fine, but if it's brick city Kuzma give him enough space to where it's contested but to where he will take the shot.

Use if: You want a scoring 4/3 who can score from anywhere on the court (sometimes).

Don't use if: You want a 4 who can do anything besides score Bottom Line: Kuzma is a decent NBA Player and I give him a 2.5/5 just because he is a good bucket half the time. Kuzma needs to learn to do more things than score if he wants to be that superstar player he thinks he can be, and even if he doesn't he needs to be more consistent if anything, he can stay in the league for a while if he can learn to be a consistent shooter and scorer.

-QUICK NOTE Sorry, this one was shorter than usual as in details of what they can do better i'm just not very intrested in writing in Kyle Kuzma.