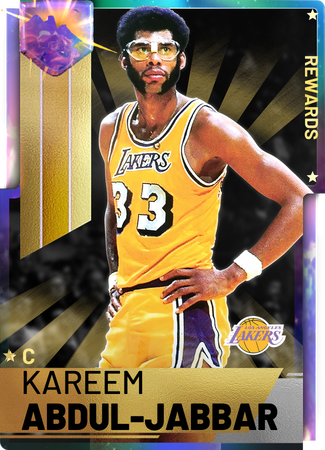 Probably my last card on here for this year (2k19).
Thought it'd be a great idea to share and inspire a bit of creativity. And hope that has been the case.
The few that do have an appreciation for the tiny details and nuances with colouring, size, clean cuts, contrast and textures etc. (as well as the more obvious themes) keep doing what you do, both on here and with other graphic projects you work on... remember it's all about the small details... keep learning, keep taking and using critique and take your time with your work... always strive to improve.
I'll be posting competitions and sharing other graphic work over on Twitter (@ BONESNBA) If anyone wants to follow my progress.

Huge thanks to everyone who liked and took the time to comment and all the best to you. I'll check in from time to time to see what ideas you come up with...

why in the actual fuck does this comment have 12 downs the man made this site better and brought up ideas the community can use. Hes like Jeremy Lin, although only for a short time, he was LEGENDARY! Respect to you Bones, sad to see you go, hopefully ill see you in 2k20? Maybe?

Thanks bro, comments from people like yourself make it all worthwhile, I'm not bothered by downvotes. It's all good and definitely 2K20 for sure! ;)

Don’t bro as you can see from the downvotes that people love your cards and want you to stay, if they can’t get COTW that’s their own problem and just need to improve, I believe that if you do want to go though that you should add a couple more cards from collection ideas you made ie retro funk etc. I hope you at least consider staying but best of luck to you if you don’t, either way I will still be watching twitter to see those card drops <3

Thanks for the comments man, I honestly never care about COTD or COTW, it's nice and I appreciate people liking what I do of course, but this isn't anything near the extent of what I can do, so I don't take it to heart.. its more about helping inspire people and breeding healthy competition... Like, if I see something inspiring, then I try to better myself and achieve beyond... some others see something inspiring and try to tear it down. I'm happy with the person I am.

I finally saw your twitter account, I really hope I start seeing a bunch of projects outside of this site. Thanks for using your talent to bring some life to custom cards, but I knew and many others hopefully saw you were way better than this, good luck in the future, hope you get on that Tyson Beck level

Thanks my man, appreciate those comments and you will for sure see a lot of different stuff from me really soon. best of luck to you too.. stay in touch on twitter if you can ;)

lol i'll check it out, I dont have a personal twitter, but me and some guys on here have a discord. I'm not entirely sure how old you are but we usually just chat it up for a bit of time every day

Best of luck to you, some of your concepts I've seen have been really nice. look forward to seeing what's next. (also unsure what's going on with the crazy downvotes just for having a conversation).

Also ppl hate on what they aspire to be, the favoritism you got clearly pissed off a lot of creators

Will you still be around?
Also check DM

Not your best but still good

If you understood the amount of image editing you might say different...

oh shi, shots fired. and i thought bonesnba was a nice guy.
bringing out the @attitude

I admit I might not have worded that response in the kindest way towards you but I genuinely meant no offence... The subtleties I put into this card was meant to make it appear more normal (more like a real card) that was what I should have said. ;) but I appreciate your support and opinion bro.

No prob dude I support you all the way

No shots, and everyone's entitled to their opinion..

dawg, u didn't do shit wrong, people getting mad at little ass details and reaching heavy. This shit as petty as LBJ comment sections smh

The way you talk makes me so uncomfortable

its the internet, want me to be formal?

I actually guessed what it meant

lmfaoo i love the internet

nig stfu, u talk mad reckless for a cloutless peasant

I don't see why he just got downvotes like this.

Like you said everyone is entitled to their own opinion.

Why did this get downvoted

just because it says bonesnba, it will probably get 100 likes.but ngl this is a pretty average card

"amount of editing" only thing u did was add lil opal border on bottom, and added gradient on normal one...

And? You can’t even make a card thats eveb equivalent to this card? Why can’t you just fucking support the dude? Oh wait, you are probably too focused on just one thing, COTD. You guys are way too fucking greedy for some useless thing. Bones is a PROFESSIONAL designer, we aren’t. It’s obvious we won’t be as good, BUT INSTEAD OF TRYING TO BASH HIM, we should get tips from him.

a fact is something you know to be true, you made an 'assumption'. And that's all good, I can see how you might arrive at that conclusion as it does appear to be a simple task and the card appearance is not 'different' and creative to the extent of my others, but it's very far from the truth.. I could list everything I changed and edited on the card if that helps?
1. player cut
2. Smart Sharpen filter to adjust Fade by moving tonal width on shadows and highlights.
3. noise reduction on image (as the source photo was very grainy).
4. filter to remove a small amount of motion blur.
5. Curves (to pick out areas I wanted highlighted that were stuck in the mid-tones).
6. image slightly sharpened after removing colour noise.
7. duplicated the player layer and added fx of an inner glow, then turned the fill of the layer value down to zero - Rasterised that layer and used the eraser brush to remove the inner glow from areas that should be shadowed (this helps any player cut stand out more and feel a bit nicer in terms of quality).
8. Selective colour adjustments to remove black from skin tone and replace with an equal mixture of RGB, to un'muddy' the image
9. final lighting tweaks.
10. added the custom galaxy Opal background border, (which I created originally in photoshop after 2K first dropped the teaser images, before the game had even dropped.)
11.. a few other steps of my process I don't actually recall right know..
Hopefully that helps explain some.

oh yeah this is gonna be helpful

yall need to be grateful.. he just gave a step by step on how he makes his image quality way better. not to mention half of yall prob stop after step one anyways..

yeah who stops at step 1 am I right hehehehe

this dude posts his last 2kmtc card (possibly), gives a word of advice to everyone here (note that he does this type of work almost daily and knows what he's saying) and little kids are downvoting him.. for what? this site never makes sense, but anyways ill be keeping up with your twitter bones, like always ;)

not to mention all the comments are downplaying the actual work that goes behind his cards, because many of the cards on this site are just finding a cool looking image on google, crop it out, and then submit. unless people on here actually notice the little changes that improve ANY picture quality 10x. that type of image quality-manipulating will always be under appreciated, especially by people on this site obviously.

People like yourself get it. That’s all that matters to me. There will always be people who hate... it won’t ever stop me doing what I do, so I pay it no mind. Thanks tho bro. Keep doing you!

Thanks for the support man, never goes unnoticed.

How u even dislike a card...
For some reason, there’s only the like button

Why are you getting mass downvoted?

Who knows man, haven't even said anything offensive... a lot of these people must be feeling a bit sensitive today, could be hormonal... I won't judge.

why hate on him? Because hes better than almost every card creator on here? you cant hate someone who is respectful, works his ass off, and is @betterthenyou so respect BONES!

This card does really remind me of the Galaxy Opals in 2k. I get the same vibes from this. Good work and continue doing your own thing

you were one of the best, goodbye bones.

Best of luck to you

We will miss you jesus


this reminds me of when jesus was crucified

I really don't get the negativity against this man. He's done nothing but bring attention and positivity to this community. I've genuinely never seen this guy even get mad, which is pretty tough considering some of the bullshit that goes down here. He made some really great concepts and cards. And I'm sure he doesn't care if he gets COTW or COTD so y'all should stop hating if he does. He also has no control over if he does or doesn't, the community upvotes stuff. Anyways big ups Bones for coming in and making some good shit

I've never seen this image before and you made it look good. Good work, and I'll really miss your cards.

Thanks man, yeh I usually try to take some time finding the right image and I've always found it a bit more challenging finding one that I haven't seen before especially for the older generation of players... I just wanted to put the photo I found through the right treatment to make it look official, no bells and whistles, no crazy effects.. Just well lit and coloured.

nice. what do u use to find your images. like what site?

Google with filters on size set to (Larger than 4MP) - Pinterest is great also... and try searching by using terms not always the player name... for example, not every photo of Larry Bird (and lots of older players) is tagged with his name, some good pictures that were uploaded a long time ago may only be tagged by event for example if you searched 'Celtics 1988' you might find a picture of Larry that didn't appear when you just searched his name.. try it out and be creative with searches it's crazy the amount of cool images you can find. Also try finding full HD or even 4K video footage and slowing the game down, make the video full screen and take some high-res screenshots. sometimes (providing there is little to none motion blur) you can run a few basic sharpen filters and obtain a really clean and 'Original' Image. hope this may be of help to some people

Kareem was better in Milwaukee!

dope, and have u ever looked in your dms, in your life

downvoting for asking a question?

I just upvoted your comments

Sorry man, a few times but it's mainly flooded with childish bulls**t comments. catch me on twitter and I'll get back to you ;)

Ye sorry about that ig I was over flattering

Haha I said mainly... a few people like yourself have sent nothing but nice comments and it's appreciated for sure.

Np dude! You along with Zedd and Paulino were my inspiration to make cards and I finally got around to making two so thank you!

ToO bIg MaKe ThE pLaYeR sMaLlEr