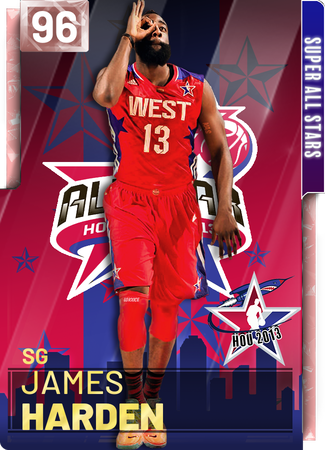 for the 2013 ASG card, we have James Harden! Hope ya'll like it boyo and stay tuned with the forums: https://2kmtcentral.com/forums/thread/113026/super-all-stars-collection

Get on Discord, and check ur DMs asap, you'll get a boner

sorry im a child of god, ive been soft my whole life

Well every year of his career he was an all star starter soo...

international voting took place his entire career, and the only player China really knew or cared about was Yao Ming

Why is this my most liked

now this is epic

it got COTD and clout built in mere hours

Give me clout I will send nudes

I liked ur Wade nigba

just wait for tmrw, it's even better

@spider sent me it's really nice

Thanks! Another one's coming out later today too, I also keep a forum with all of them on it ;) Glad you like it

lok, position him lil too right and this easily your best card

He's in the middle, to the right the blue stripe wouldn't be equivalent, also the other side would have more space, also his shorts would be touching the logo

dude i love these super all star cards

If u don't already I recommend following my forums, i linked it in the top comment ;)

also if you haven't liked leave a like, this card ain't pullin any attention sadly :'(

who the hell is james hardin

the other nigga this James Hardon

No im talking about James Headband

i stil dont know who that is mate

u fuckin genius i never thought of that

I know right, who else thinks he is about to win ROTY

WE HERE, 5TH COTD LETS MAKE IT MY 3RD COTW, thanks ya'll I mightly appreciate the love

Congrats Lok! I’ve wanted this to get COTD since I first laid eyes on it

I'm glad it made it, maybe we can get COTW together

Nah cause I’m last on COTW, my alts would have to go to work but better would be pisses cause he thinks his Reggie actually deserves it lmao

I think that nigba took a like away cuz I supported you, and didn't find it that bothersome

make love to me woman

Does he deserve more or less?

tuff, well hopefully he gets there! He's very nearly COTW

COCK BACK MY PISTOL LOAD IT UP AND SHOT EM TWICE

He told me he was afraid to die

i told em' it's too late my friend, it's time to say 'goodbye'

eh not bad, lil noticable how you cropped it but maybe thats what you were aiming for, noice cad

That's just how the clipping mask took off the skyline, thanks tho

Man this card just FLEW outta this world (get it

Houston was founded by land speculators on August 30, 1836,[9] at the confluence of Buffalo Bayou and White Oak Bayou (a point now known as Allen's Landing)[10] and incorporated as a city on June 5, 1837.[11] The city is named after former General Sam Houston, who was president of the Republic of Texas and had won Texas' independence from Mexico at the Battle of San Jacinto 25 miles (40 km) east of Allen's Landing.[11] After briefly serving as the capital of the Texas Republic in the late 1830s, Houston grew steadily into a regional trading center for the remainder of the 19th century.[12]

The arrival of the 20th century saw a convergence of economic factors which fueled rapid growth in Houston, including a burgeoning port and railroad industry, the decline of Galveston as Texas' primary port following a devastating 1900 hurricane, the subsequent construction of the Houston Ship Channel, and the Texas oil boom.[12] In the mid-20th century, Houston's economy diversified as it became home to the Texas Medical Center—the world's largest concentration of healthcare and research institutions—and NASA's Johnson Space Center, where the Mission Control Center is located.

Houston's economy has a broad industrial base in energy, manufacturing, aeronautics, and transportation. Leading in healthcare sectors and building oilfield equipment, Houston has the second most Fortune 500 headquarters of any U.S. municipality within its city limits (after New York City).[13][14] The Port of Houston ranks first in the United States in international waterborne tonnage handled and second in total cargo tonnage handled.[15] Nicknamed the "Space City", Houston is a global city, with strengths in culture, medicine, and research. The city has a population from various ethnic and religious backgrounds and a large and growing international community. Houston is the most diverse metropolitan area in Texas and has been described as the most racially and ethnically diverse major metropolis in the U.S.[16] It is home to many cultural institutions and exhibits, which attract more than 7 million visitors a year to the Museum District. Houston has an active visual and performing arts scene in the Theater District and offers year-round resident companies in all major performing arts.[17]
A rocket (from Italian rocchetto "bobbin")[nb 1][1] is a missile, spacecraft, aircraft or other vehicle that obtains thrust from a rocket engine. Rocket engine exhaust is formed entirely from propellant carried within the rocket before use.[2] Rocket engines work by action and reaction and push rockets forward simply by expelling their exhaust in the opposite direction at high speed, and can therefore work in the vacuum of space.

In fact, rockets work more efficiently in space than in an atmosphere. Multistage rockets are capable of attaining escape velocity from Earth and therefore can achieve unlimited maximum altitude. Compared with airbreathing engines, rockets are lightweight and powerful and capable of generating large accelerations. To control their flight, rockets rely on momentum, airfoils, auxiliary reaction engines, gimballed thrust, momentum wheels, deflection of the exhaust stream, propellant flow, spin, or gravity.

Rockets for military and recreational uses date back to at least 13th-century China.[3] Significant scientific, interplanetary and industrial use did not occur until the 20th century, when rocketry was the enabling technology for the Space Age, including setting foot on the Earth's moon. Rockets are now used for fireworks, weaponry, ejection seats, launch vehicles for artificial satellites, human spaceflight, and space exploration.

Chemical rockets are the most common type of high power rocket, typically creating a high speed exhaust by the combustion of fuel with an oxidizer. The stored propellant can be a simple pressurized gas or a single liquid fuel that disassociates in the presence of a catalyst (monopropellants), two liquids that spontaneously react on contact (hypergolic propellants), two liquids that must be ignited to react, a solid combination of fuel with oxidizer (solid fuel), or solid fuel with liquid oxidizer (hybrid propellant system). Chemical rockets store a large amount of energy in an easily released form, and can be very dangerous. However, careful design, testing, construction and use minimizes risks.

this pissed me off

LETS GET THIS TO 100 BOIS @LOKxICE

Didn't deserve it tbh, this isn't the best feeling in the world, but yay?

You only got 100 upvotes because of that sick shadow affect

I can't tell if you're joking or not, I think it's slightly too opague here

I was joking, sorry if it wasn't obvious. I like to make my comedy not obvious

Understandable, I wish my Grant Hill got these likes smh

Yup :/ I wish I could give these likes to Grant Hill

I agree, Grant Hill is my favorite project, and card I've produced but went very under the radar

YOUR A BIG BALLER

yuhh i saw it before

it be like that sometime nigba, lets get Shaq to 100 likes doe

you the one to make it to the top