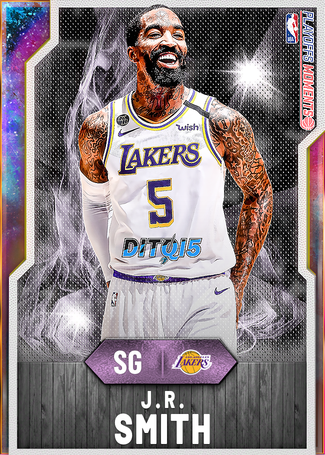 Just how the the 2018 Warriors Game 1 Victory fell in place.

Also, keep up the work.

How you so lucky on card of the days

wdym, he just makes the best cards normally when he posts. Not so much luck, more just skill

Legend Has It That Jr Smith Still Haunts Lebron To This Day. It all started on Thursday may 31st 2018 game 1 of the nba finals in the fourth qtr the Cavs are down by 1 point, (106-107) and with 4.7 seconds Klay Thomspon fouls George hill sending him to the free throw line, he makes the first one, the score is now 107-107 George hill prepares for the second free throw, George hill shoots he misses it, but wait Jr got the rebound he can easily put it up to win game 1 but he runs out to the three point line thinking there in the lead, the clock is ticking and when lebron gets jr to realize he passes it to George hill in the corner but hill had no chance of making it as he was basically fading away from out of bounds with kd smothering him, all of this sends them to overtime which the warriors win and ultimately the whole series, all Jr had to do was put it up right then and there and they would’ve won game 1.

And that’s all folks

noome goimg to read this shit

I'm happy, and sad at the same time. As a Lakers fan, I obviously want them to win the championship. I also really like J.R. Smith, his antics are hilarious (other than Game 1, that was depressing) and he's a good shooter. I'm sad though because Avery Bradley is a better player, and J.R. hasn't played for a while.

I'll be depressed if they've come all this way during the regular season just to lose because we had to shut the whole world down because of a virus that spread too fast, giving players like Paul George, Kawhi, and possibly KD time to heal and be healthy in time for the Playoffs, and threaten the Lakers' success.

I wouldn't see it like that because they really didn't have to try as hard because like you said players like Kawhi, Paul, and KD needed time to heal. So if these players come back for the Playoffs, it will give the Lakers a chance to show how good they are and if they are worthy to be called one of the best teams. Also if they come out winning the finals it will show that at the end they earned it. Also It's Kinda not fair if any other teams can't use there good players for the Playoffs while the Lakers get to use Lebron and Kuzma.

i just woke up to a big W

i hate the lakers, so i dont want this to happen. #puthimintheeast

that would help them so, yay!

HOLD UP HOLD THE FUCK UP!

omfg this is nice

J.R. Smith is going to drop 30 in the first round

wait what did this actually happen

Not yet, he’s the Lakers front runner to replace Avery here in Orlando. Nick Young has expressed that he wants to play for one more year, so the lakers might consider him aswell

yeah J.R. smith is the most wanted candidate to replace avery bradley in the nba restart

Me personally, I think Jamal Crawford would be the best option as me being a Lakers fan because he plays a bit more defense and has a lot more playoff experience, yes J.R. Has playoff experience but we all saw that means nothing, he literally choked the game 1 for the cavs because is basketball iq is lower than the amount of players that troydan starts off half his videos with. Jamal also put up 51 in his last nba game, he also won 6th man multiple times which was Avery Bradley’s role on the Lakers. I am just curious to see if he even gets a ring if they win because he didn’t play in the playoffs, but I guess he will get one because he is an official member and he played minutes for them this season and has not been released or traded

Can I get some more upvotes on the comment above??? Damn this Is good

Thx, I really study the NBA and the teams rosters and history’s I hope I can become a nba announcer someday! My dad knows a lot of people who work in radio so I have a chance

wait, what about Dion doe? Won't he play instead of Bradley

No I’m pretty sure Dion Waiters is already on the team and J.R. is replacing him

But Bradley is leaving, not Dion. I would just play Dion instead

I mean I’d rather them start Dion and Danny Green together, but idk

Yeah bro, drinking all that Henny before the game

https://2kmtcentral.com/20/lineups/487920/most-downvoted-piece-of-shit GO ON THIS FUCKING LINEUP

Q back at it again with some heat!

whoever thinks J.R. Smith is going on the Lakers is High

tbh, it was actually pretty good, people just didn't get it

Nice Card :) Also I am sry for our past and for copying the overalls of your generation next card when I remade your thing. It was dumb and I really wish I could go back in time and fix my mistakes :(

Cool. Now own up to lying about being hacked.

you dm me on insta asking for this cut smh

Not sure why you're going with this as a cry for attention but whatever. I didn't even know you existed before 20 mins ago and I have no reason to ask other people for cuts when I do all my own stuff.

issa new phase. "Insult Q, than steal his stuff, I get clout!" "YAY!" idk why doe, it's annoying