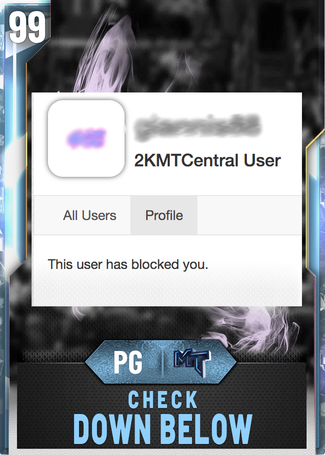 First off, I just want to say that I usually wouldn’t make cards like these, and you can tell that this is the case considering that a couple of people have blocked me in the past and I haven’t said a thing.

I just want to point out also that this card isn’t meant to be directed at this user, however I find reflective of the whole of the 2KMTC community.


I know that a lot of you guys wouldn’t have seen the comments I posted on this users’ stuff to do with recent trends on this site, you should know what I am talking about and yes, I am being vague on purpose as I don’t want to draw this much attention to this part of the issue. The stuff made and posted by this user in the space of less than 24 hours basically defined the word hypocrisy (describes someone who is a hypocrite), When saying on a certain card that it sucked, before posting a card that defended this person who made the card and then posting a comment later that day on a card posted by the user that again said it sucked. My response to all of these was calling him out on going back on his opinion and then going back again on his new opinion, however I did clearly state that it wasn’t an “expose” or anything like that, but a chance for this user to explain himself, admit his mistakes and look to improve.

Instead, the user told me that I was dumb and stupid and took it the wrong way, even though I did clearly explain that I was just giving him a chance to admit his shortcomings. He deleted the comments and card before blocking me.

I think that the reason people do this is because they think that this website is a place where they can come and just hate on people with no consequences, however they have to understand that this website is still a social media platform, and I know it sounds kinda corny and dumb but it is possible, albeit not likely, that if your future employers want to look at your activity on social media, it could turn out that they look at this site, and if they see highly toxic and inappropriate things under your name it is possible that it could influence their decision on whether you are employed or not. This is exactly why I try to stay chill and easy-going on this site, even when I am in an argument.


really wtf are you doing

Dude, definitely the best card you've made. Keep up the good work!

Is this meant to be sarcastic?

No, I'm genuinely impressed. Your killing it my man!

ok, it's pretty obvious that you are trying to incite an argument here and trying to get a rise out of me, i can tell by the fact that you are doing this in an information card posted 5 weeks ago. Just stop, seriously i can't be bothered anymore with you troll accounts, actually go and get a life instead of sitting on a website trying to have arguments.

ok then so why is he coming onto this card and saying this stuff, i'm not going against you but i've seen it all before, these trolls rope people in by insulting them or in this case using obvious sarcasm, he has no reason to be here and no reason to say this stuff

He isn’t a troll tho

Brother, your like that WNBA player who can't take a compliment. I mean no harm.

You have to understand though that i can't trust you considering our experiences in the past, plus its a bit weird if you genuinely consider this my best card as it doesn't even feature a player

Nah man, i'm past that. I think its good to bring awareness to things like this.

fair enough, i respect that