The real story of DORTtheFORT 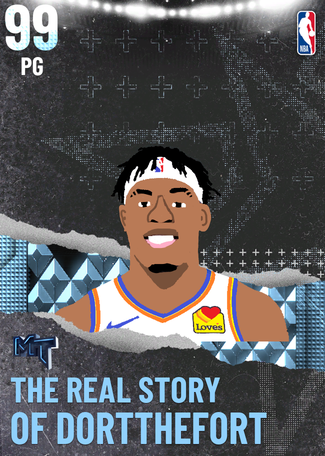 I was born in Montreal, Quebec to Haitian parents who moved to Canada from Saint-Marc when they were around 21 years old. Growing up in Montréal-Nord, he first played soccer as a goalkeeper, but my brothers later influenced me to play basketball. I played street basketball at Saint Laurent Park near his home in Montreal. My involvement in the sport helped him avoid joining street gangs like some of his friends.[ At age 12, I began playing organized basketball in Park Extension, a neighborhood in Montreal, where I was coached by Nelson Ossé. He started weight training at age 15, when he stood 5 feet 11 inches (1.80 m), and grew about one inch per year through the rest of his teenage years.
I spent my freshman season at the high school level in Quebec.Through my high school years, I competed for Brookwood Elite on the Amateur Athletic Union (AAU) circuit.[8] In July 2015, I played for Canada at the adidas Nations tournament, averaging 9.2 points and 4 rebounds through 4 games.As a sophomore, I transferred to Arlington Country Day School in Jacksonville, Florida to face better competition and learn English. Before moving, my coach Nelson Ossé urged me to improve his poor academic performance.In August 2016, I averaged 11.3 points through 6 games to lead Canada to second place at adidas Nations. Later in the month, I was invited to the Nike Americas Team Camp, where I was named most valuable player (MVP) of the All-Star game. I moved to Conrad Academy in Orlando, Florida for my junior season, following his former Arlington Country Day coach Shaun Wiseman.[13] In 2017, I took part in adidas Nations and the Nike Hoop Summit All-Star game.[14] I also scored 30 points to win team MVP honors at the BioSteel All-Canadian Basketball Game.[15] On October 18, 2017, I committed to play college basketball for Arizona State, becoming the program's most touted recruit since James Harden in 2007.[16] As a senior, I joined the Athlete Institute, a prep school in Mono, Ontario.[17] In April 2018, I reclaimed team MVP accolades at the BioSteel All-Canadian Game after recording 34 points and 8 rebounds.On November 6, 2018, I made my debut for Arizona State, tallying 28 points, 9 rebounds, and 3 steals in a 102–94 win over Cal State Fullerton in double-overtime.[19] I broke the school record for freshman debut points.[20] Then, on November 12, recorded his first double-double, with 12 points and 12 rebounds in a 90–58 win over Long Beach State.[21] On November 21, I posted 33 points, 7 rebounds, and 4 assists against Utah State in the heavyweight bracket of the MGM Resorts Main Event, scoring the third-most points by a freshman in Arizona State history.[22][23] I was named MVP of the tournament.[24] A few days later, I was named Pac-12 Conference Player of the Week.[25] I struggled offensively towards the end of December, shooting a combined 9-of-45 from the field through four games from December 15 to December 29.[26]

Following Arizona State's loss in the 2019 NCAA Men's Basketball Tournament, I announced his intention to forgo his final three seasons of collegiate eligibility and declare for the 2019 NBA Draft.[27]After going undrafted in the 2019 NBA draft, I signed a two-way contract with the Oklahoma City Thunder.[28]

I made my NBA debut on December 6, 2019, playing 7 minutes and grabbing 1 rebound in an overtime win against the Minnesota Timberwolves.

My next game would be against the Portland Trail Blazers on December 8, 2019, playing 20 minutes and grabbing 3 rebounds and 2 points.

In the 2020 NBA playoffs, I had been lauded for my defense on the high-scoring James Harden[32][33] and for, by at least one measure, being "the highest-effort defensive player in the NBA."[34] After the Thunder's close Game 7 loss to the Houston Rockets in the first round of the playoffs, I joined LeBron James and Kobe Bryant as the only players 21 years or younger to score over 25 points in Game 7 of a playoff game.

yes I am the actual Lu Dort

ah fuck whoever downed me

i upped now tho

here before the story

his? sorry i dont understand

? i dont know what you mean

you kept saying "his" in the story

here before the story

i did it are you happy now