Timeline of my 2kmtc experience in comments, read if you have time 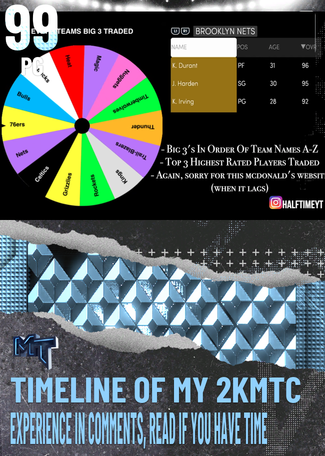 February 2020- well a couple of my friends from school found this site and did drafts, so I started and it was kinda fun but got boring quickly

March 2020- nothing really happened, I just continued to do drafts, then once the lockdown started, I started making these random lineups of all the teams in the nba

April 2020- I finally created an account cuz I wanted to comment on stuff ig, my account was @ice-trae , and I made my first card which was a Joel Embiid GOAT card because @itischeese123 wanted to get an opal embiid lol

May 2020- I started making these lineups that had the best players in the NBA and started spamming them everywhere, I got a lot of hate because my rankings were shit, and I spammed.

June 2020- I was still spamming those lineups everywhere, but getting less and less comments, so I decided to stop.

July 2020- nothing really happened, I made a couple of GOAT cards of my fav players, but I was mostly inactive that month

August 2020- I started making more cards on 2k temps, My cards had no fx tho, but at least I cut them by myself

September 2020- I met some of my best friends from the site at that time, pac, tree, woj ( even though he hated me then), and abashirtx, even tho we got a little beef now.

October 2020- one of my best friends IRL joined the site his username is @pg.thirteenn , I also really started getting into card creating, even tho my cards were still shit

November 2020- 404ing happened, lotta big users left, people got banned, kinda a low point for the site, I got better at my cards and swaps

December 2020- I got banned for attempting to 404 q’s farewell forum, and moved to my alt @rainbowlicker , I really started to try to get better with cc’ing, with my temps, swaps and my fx I tried, even tho it sucked

January 2021- I think I got to a new level with my cc’ing in finally becoming an all-around good cc, almost everyone relevant on the site started leaving tho, and I started to get less active.

February 2021- Well I have stopped cc’ing due to my school work increasing and me falling behind in homework, also have become wayyy less active due to my dad blocking this site, except on my breaks.

This site really has reached a low point and I don’t think it will come back with everyone leaving for irrelevant reasons, for ex: pug, 2kg, and madden left bc people were saying fuck Tupac, when 2kg made a card that said fuck Tupac, and pug made a lineup that said fuck Tupac, and madden said on a stream that Tupac was a lazy ass bum, obviously alting has completely destroyed the site, and alting for “good reason” like Hakeem does, does not help this situation. Also the state of the users too, almost all relevant users have left, leaving this site being owned by gullible people that believe everything you say. I just wanted to get my opinion on the state of the site bc, this site helped through my hard times, if you didnt know, I don’t have a phone, so no way to text, and I didnt have discord until 2 weeks ago, so the only way to contact my friends were through zoom.us messages lmao. This site really helped me through those time, and I want it to keep on going, but I think with the current state of the site, Idk if I’ll leave yet but if this keeps going on, I think I will. Ima stop this now lol

i just remembered i got banned in november :/

i have no idea

im on earth im not an alien

oh i thought you were a gray person

yes i am from the core of the earth

goodbye if you leave

yea where am i

WHy did u dad block it?

cuz i was doing bad in school

why did yu show him the site in the first place

i didnt lmao, he looks at my history

what u could do Is just clear it or go incognito

nah, he has the special parental block called quistodio, that shows him everything

DANGGGGGGGG
That's tuff
SO he can seee what u doing rn?

type in google: fuck off dad and stop stalking my history. so he sees that

so how r u on when ur dad blocked the site

u said February my dad blocked the site except for breaks

ye, ive been doing fine without the site

did i not ruin your rep enough?

can u not tag me please buddy thank you

*slaps*
i said can you not motha fucka

im a criminal!(aye shout out eminem)she was more like a beauty queen from a movie scene!

dont you dare curse at me

you just said the s word, that is considered a bad word, therefore rude, therefore your mean

u spamming me aint funny,its pathetic

u suck at trolling LMFAO

then i cant talk to u tho, and ur my best friend on this site

ye ill def still be active in dms and stuff

Do ya'll mind liking this up please? It's not that good https://2kmtcentral.com/cards/483315

Thank you, much love.

some one made this @BALLINLIKEBONGASALT2

such an odd name lmao

once i get there

wait no it was @HeatCheck16

oh, i thought he left

Bruh i do lol mb, my fault i liked fort at the time

ye, i remember tree said that he didn't wanna call him a fortnite kid

Sorry for being one of the reasons why this site sucks

nah, you good, its some other people

sorry, i just listed some names on the top of my head, you are def one of my best friends too

suck me off first

what are you trans or sum